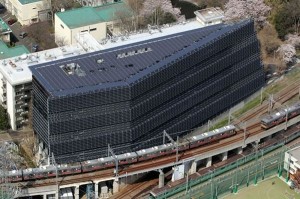 Tokyo Institute of Technology has built a new building which is covered in solar panels.

Tokyo Institute of Technology is considered as a prestigious university the world over and in fact the best in Japan.The unveiling of its self sustaining building has enhanced its image for the eco conscious community.

The exterior of the Environment and Energy Innovation Building and also the roof is covered with 4500 panels. The capacity of those panels is about 650 kilowatts of  power.

The building has seven floors and two additional basement levels and because of the solar panels  it consumes half the power that a building of the same size would have consumed without solar installations.

Posted by solar-magazine.com on Apr 16 2012. Filed under _featured slider, Solar PhotoVoltaics. You can follow any responses to this entry through the RSS 2.0. You can leave a response or trackback to this entry