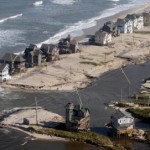 While Hurricane Irene lashed the eastern Seaboard and the Canadian Maritimes over the weekend, killing 31 people there have been absolutely no reports of damage to renewable energy facilities.

“No damage,” he wrote in an email early Monday morning. “The facility is intact, and there are no turbines in the water at present” said Matthew Lumley, communications director for the Fundy Ocean Research Centre for Energy in Halifax, Nova Scotia.

Irene passed on US Coast over the proposed sites of several wind projects, but none had progressed so far as to be in harm’s way.

Until the hurricane was downgraded to a tropical storm more than 5.9 million were without power in 14 states.

Posted by solar-magazine.com on Aug 30 2011. Filed under _featured slider, Analysis & Features, BUSINESS, INDUSTRY, USA, Wind, WORLD. You can follow any responses to this entry through the RSS 2.0. You can leave a response or trackback to this entry