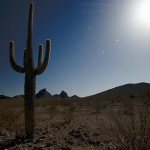 The new facility is sponsored by the solar giant NRG and will use two cutting edge technologies that improve the stability of power supply from the plant to the grid.

The two technologies are new to the solar industry, so their successful application in the Agua Caliente project could make them industry standards throughout the U.S.

NRG is also the force behind the Department of Energy’s super-ambitious distributed-power solar project, called Project Amp who was announced earlier this summer, involves the installation of $1.4 billion worth of rooftop solar panels on hundreds of buildings, basically doubling U.S. solar capacity over 2010 levels.

Posted by solar-magazine.com on Aug 8 2011. Filed under _featured slider, Energy Market, INDUSTRY, MARKETING, Solar PhotoVoltaics, Technology, USA, WORLD. You can follow any responses to this entry through the RSS 2.0. You can leave a response or trackback to this entry