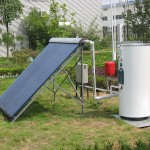 The consequence is clear: renewable energies are not in the focus of the government.

The administration of the country only talks about photovoltaic and wind energy.

During a conference in Algeria in January, the state-owned electricity and gas utility Sonelgaz had 20 minutes to talk about projects in the field of renewable, and the speaker did not once mention the words ‘solar water heating’.

Algeria still remains in a deep slumber when it comes to heating water with the sun.

So far, annual market volume is estimated at around 50 residential systems per year.

Posted by solar-magazine.com on Jul 1 2011. Filed under _featured slider, Analysis & Features, Asia, BUSINESS, Energy Market, INDUSTRY, Legislation, MARKETING, Solar Thermal, WORLD. You can follow any responses to this entry through the RSS 2.0. You can leave a response or trackback to this entry