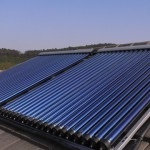 It seems the recession threw black spots over the European solar thermal market throughout 2010.

According to experts the solar thermal market will pick up again in 2011 because the European markets have recovered maybe except the Spanish market.

The key to future growth will be driven by future conventional energy price trends.

Posted by solar-magazine.com on Jun 27 2011. Filed under _featured slider, Analysis & Features, BUSINESS, Energy Market, Europe, INDUSTRY, Legislation, MARKETING, Solar Thermal, WORLD. You can follow any responses to this entry through the RSS 2.0. You can leave a response or trackback to this entry