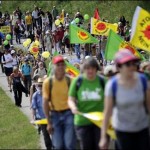 We all know how dangerous nuclear power is after the disaster in Japan.

Many countries have begun protest to give up nuclear energy and Switzerland is one of them.

The last reactor in Switzerland will finally go offline in 2034 because the Swiss government just voted on Wednesday to abandon nuclear power in their country.

People’s confidence in the feasibility of nuclear energy has collapsed since the nuclear meltdown disaster in Japan.

Germany also decided to reject nuclear, and has accelerated the shuttering of a number of its aged reactors.

Over 20,000 people protested against nuclear power in Switzerland; the demonstration was the largest anti-nuclear power march since the eighties.

Posted by solar-magazine.com on May 30 2011. Filed under _featured slider, Analysis & Features, BUSINESS, Europe, INDUSTRY, Legislation, WORLD. You can follow any responses to this entry through the RSS 2.0. You can leave a response or trackback to this entry