A huge floating solar power plant to be built in India 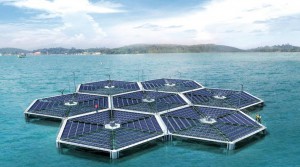 The National hydroelectric power company in India announced that they are going to construct a great solar power plant that will sail on top of a lake.

India has previously announced their strategy to build a 10 megawatt solar situated on some of the its canals, the Asian country took their idea to another level and want to construct a floating power station that will be situated on one of the large stretches of water in Kerala, India.

This particular floating solar power plant machinery was expanded by India’s Renewable Energy College and it is going to be implemented by the National Hydro Power Corporation, India’s national energy company. The very first of its plants will be authorized this fall.

“NHPC had contacted us for offering technical know-how and installation assistance for their proposed 50-mw plant,” reports the chairman of the Renewable Energy College, Gon Choudhury. “Each station would require around 3000 square feet of space to generate 20 kilowatt of power. There are many water bodies that could be used for this,” he added.

The project is also said to be eco-friendly and it will have a small impact on the surroundings, as Choudhury illustrates:

“The ecology of the water body is not likely to be affected much and it will also reduce evaporation, thus helping preserve water levels during extreme summer. Solar panels installed on land face reduction of yield as the ground heats up. When such panels are installed on a floating platform, the heating problem is solved to a great extent. This isn’t an ideal solution, it’s not as though we can go and cover the world’s oceans with photovoltaic cells, but it’s certainly a solid intermediary step until we get those space-based solar farms up and running.”

This project looks a lot like one of Japan’s offshore solar power plants built in 2013. The 70MW Kagoshima Nanatsujima Mega Solar Power Plant was conceived as part of the move towards a more green energy area as a follow-up of the 2011 Fukushima meltdown and is located in Japan’s Kagoshima Prefecture.

Posted by roxana on Jul 10 2014. Filed under _featured slider, INDUSTRY, Solar PhotoVoltaics. You can follow any responses to this entry through the RSS 2.0. You can leave a response or trackback to this entry