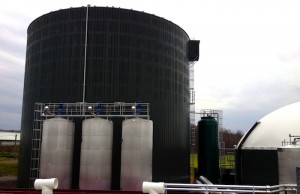 In New York, USA, was opened one of the largest on-farm, co-digestion biogas power plants.

The project under the name Synergy Biogas LLC is built by the US company CH4 Biogas LLC.Also is one of the state’s first biogas projects specifically designed for the co-digestion or processing of animal and food wastes.

The biogas created in the 120,000-gallon co-digester is fueling a 1.4 MW CHP plant to generate renewable electricity.

The project is expected to reduce the dairy farm’s baselood greenhouse gas emissions by about 8,500 tons of CO2 annually, which is equivalent to the CO2 emissions of 1,700 automobiles.

The facility also will produce an estimated 17,500 cubic yards of bedding material for livestock while reducing manure odors and helping the farm manage nutrients applied to cropland.

National Grid is supporting the project as part of its broader strategy to help upgrade New York state’s energy infrastructure, promote further economic growth in the region and encourage the development of renewable energy resources

The New York State Energy Research and Development Authority is providing US$ 1 million.

Posted by solar-magazine.com on May 17 2012. Filed under _featured slider, INDUSTRY, USA. You can follow any responses to this entry through the RSS 2.0. You can leave a response or trackback to this entry