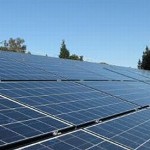 The first college in the U.S. to go ‘grid positive’, the Butte College has installed 25,000 solar panels.

The college will generate over 100 percent of its electricity from solar power.

The solar panels are expected to generate more than 6.5 million kilowatt hours of electricity annually, which is more than the annual power consumption of the college.

The system generates more energy than it consumes, it says that it will be able to save between $50 million and $75 million over the next 15 years.

Butte College will surely set an example for other American institutions to go green.

Posted by solar-magazine.com on Jul 6 2011. Filed under _featured slider, BUSINESS, Education, Green Buildings, INDUSTRY, Market News, Student, USA, WEB, WORLD. You can follow any responses to this entry through the RSS 2.0. You can leave a response or trackback to this entry