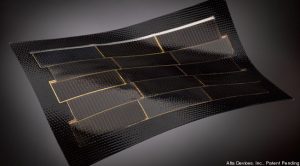 With its most recent solar efficiency record of 31.6%, Alta Devices continues to achieve solar efficiencies that are substantially higher than all other commercially available solar technologies.

According to Business Wire, this breakthrough, combined with its unique thinness and flexibility, redefines how solar technology can be used. In particular, Alta’s solar technology is of great interest in the UAV (unmanned aerial vehicle) market. The increased power-to-weight ratio of Alta’s technology enables dramatically different possibilities for an aircraft using this technology versus any of the other solar power options.

As an example, on a typical HALE (high altitude long endurance) UAV aircraft, Alta’s solar material requires less than half of the surface area and weighs one-fourth as much while providing the same amount of power as competing thin film technologies. These savings open UAV designers to a variety of alternative design options. Additional batteries can be installed on the vehicle, providing longer operational life spans and flight times than originally considered. Alternatively, payload functionality can be tailored for higher speed or longer distance wireless communications. Either of these design optimizations translate into a considerable increase in economic value to the aircraft operator.

Our goal has always been to enable solar power to be useful in configurations and applications that have never before been possible,” said Rich Kapusta, Alta Devices Chief Marketing Officer. “The UAV application is an important example of how this happens.”

Alta Devices also provides solar technology for a variety of other applications including wearable devices and the Internet of Things (IoT) in order to eliminate the need for battery replacement or recharging.

31.6% efficiency certified by the NREL

Solar efficiency is measured and certified by the Energy Department’s National Renewable Energy Laboratory (NREL). According to NREL’s testing, Alta Devices’ new dual-junction solar cell is the world’s most efficient 1-sun cell at 31.6% efficiency. This is the seventh overall solar efficiency record that Alta Devices has set since 2010.

Alta has achieved this breakthrough by modifying its basic “single-junction” gallium arsenide (GaAs) material. The company’s dual junction technology builds on the basic GaAs approach but implements a second junction (or layer) with Indium Gallium Phosphide (InGaP). Because InGaP uses high-energy photons more efficiently, the new dual-junction cell generates more electricity from the same amount of light than a single-junction device. With this breakthrough, Alta currently holds both the dual-junction and single-junction records at 31.6% and 28.8%, respectively.

Posted by roxana on Apr 28 2016. Filed under _featured slider, INDUSTRY, Solar PhotoVoltaics. You can follow any responses to this entry through the RSS 2.0. You can leave a response or trackback to this entry