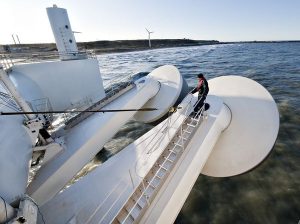 The Wavestar machine draws energy from wave power with floats that rise and fall with the up and down motion of waves. The floats are attached by arms to a platform that stands on legs secured to the sea floor. The motion of the floats is transferred via hydraulics into the rotation of a generator, producing electricity.

According to wavestarenergy.com, waves run the length of the machine, lifting 20 floats in turn. Powering the motor and generator in this way enables continuous energy production and a smooth output. This is a radical new standard and a unique concept in wave energy; it’s one of the few ways to convert fluctuating wave power into the high-speed rotation necessary to generate electricity.

“Environmental and climate issues, as well as uncertainty about energy supply, demand that we diversify our energy supply to multiple renewable and clean sources. With enough space for wave energy machines but little exploitation thus far, Wavestar is not just developing a wave power device, but energizing a whole movement.

Energy production with wave energy is more predictable than wind because waves come and go slowly and can be forecast 24 hours ahead. The Wavestar machine could also be installed together with a wind turbine which would further increase efficiency and reduce set-up costs. Wavestar understand that we need many renewable energy solutions, not just one, so it makes sense to harness the power of waves”, the team said.

Survivability at sea is a big problem for wave energy devices. But unlike any other wave energy concept, the Wavestar’s sea survivability is guaranteed, and the concept has been proved during many years of continuous operation at sea. It can continue production in strong wind and waves, and automatically raises the floats out of the sea when the conditions become too stormy.

The Wavestar machine’s efficiency is being continually increased. The design was recently modified to reduce the cost by 40 per cent, while energy harvesting capacity and other aspects of the machine are being constantly improved for better efficiency. The Wavestar machine is less visible and quieter than wind turbines, and it also has a positive impact on wildlife below the machine, creating a sanctuary enhanced by the limits on nearby fishing.

The aesthetic profile of the machine won the prestigious Biennale Prize at the Biennial of Crafts and Design in 2009. The machine was nominated for the “highly original and striking sculptural design of a wave power machine, which in one single image symbolizes and clarifies the huge potential of this renewable energy resource … the wave power machine constitutes a beautiful counterpart to the clear form expression of the modern windmill.”

With the 500 kW machine in development, the company has claimed a position among the leading alternative energy developers in the world. Wave Star aim to make it the first series-produced 1 MW machine for big oceans, ready for sale in 2017. Wave Star is not stopping there though. The machine will then be doubled in size, capable of handling twice the wave height. This will increase each machine’s output to 6 MW, enabling a single machine to provide energy for 4,000 homes.

More info and details below:

Posted by roxana on Apr 26 2016. Filed under _featured slider, INDUSTRY, Wave power. You can follow any responses to this entry through the RSS 2.0. You can leave a response or trackback to this entry