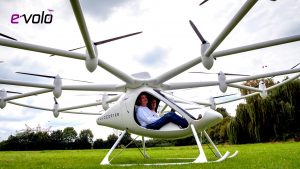 The Volocopter uses 18 rotors, which its inventors say make it ‘safer simpler and cleaner’ that current designs. Image source.

Developed by the German company e-volo, the Volocopter VC200, a 18-rotor rotor electric helicopter (aka multicopter) completed its first official manned test flight without a hitch, and documented the whole thing on camera. The video shows the managing director Alexander Zosel of the company of E-Volo piloting the maiden manned emission-free aircraft over an airfield in southern Germany.

According to TechWorm, e-volo’s Volocopter is built from fiber composite material with a 450 kg (992 lb) take-off weight, and nine individual batteries power the all-electric motors and 18 rotors to make for a top speed of 100 km/h (62 mph).

Best described as a drone-helicopter hybrid, the Volocopter has two seats available on it, while it runs on an electric engine with precision control being manned by a single joystick that is accompanied by a handful of buttons. Despite its complex shape and strange appearance, the Volocopter is designed to bring personal flight to the masses by being easy to fly.

“It is definitely a sublime feeling to lift off, fly the first few meters, and then actually take my hand off the joystick and think that, yeah, it’s really as if I’m standing on the ground, and then I look down and there are 20-25 meters beneath me,” Zosel said. “So it’s definitely unbelievable what we’ve achieved here. It’s seriously unbelievable!”

e-volo has tested its design with over 100 unmanned flights, but now that a human has actually piloted one, it’s on to a whole new round of testing. e-volo’s first test flight program saw the Volocopter hit speeds of 25 km/h (15 mph) at only low altitudes. The second phase will test the aircraft at speeds of 50 km/h and a medium altitude, with the final phase to raise that to higher altitudes and its top speed of 100 km/h.

If things continue to happen as planned by e-volo, the company has ambitions to produce the Volocopter in “large quantities” for the air sports market. It’s also looking at the possibility of air taxi services initially for “predetermined routes as airport shuttles or at sensible traffic nodes such as bridges.”

It may be a while before we see drone-helicopter hybrids like the Volocopter hovering overhead, but if it does happen, e-volo is keen to lead the way.

Watch Zosel take-off in the Volocopter in the video below:

Posted by roxana on Apr 18 2016. Filed under _featured slider, Europe, WORLD. You can follow any responses to this entry through the RSS 2.0. You can leave a response or trackback to this entry