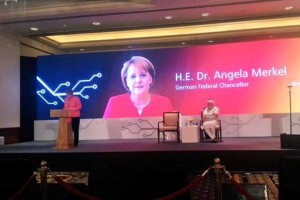 Renewable energy is one of the key areas of Indo-German partnership mentioned in the Joint Statement of Hannover in April 2015. Image via The Financial Express

According to The Financial Express, the agreements were signed at a time when Germany’s chancellor Angela Merkel is on a state visit in India.

Renewable Energy is one of the key areas of India-German partnership. The financing of the transmission infrastructure of renewable energy projects, the Centre and State grids will be strengthened to evacuate more green energy, the statement said.

Posted by roxana on Oct 6 2015. Filed under _featured slider, Asia, Europe, WORLD. You can follow any responses to this entry through the RSS 2.0. You can leave a response or trackback to this entry