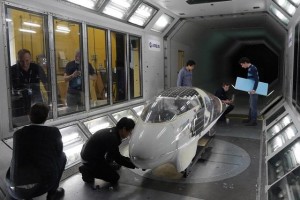 The launch of a new solar-powered racing car built by British students aims to highlight the potential of electric vehicles.

According Engineering and Technology Magazine, the 60-strong student organization Cambridge University Eco-Racing Team (CUER) has been designing, building and racing eco-vehicles since 2007 and later today it will unveil its latest creation – a solar-powered car called Evolution.

The vehicle will be entered into the Bridgestone World Solar Challenge, an endurance event across the Australian Outback in October – the same event which the team’s last car, Resolution, had to bow out of in 2013 after it crashed during final road testing.

Driver Alan Jamieson, who is studying for a PhD in fluid mechanics at Cambridge, said he was hoping to overcome the previous disappointment and make a splash this year in one of the “toughest” challenges in the world.

He added: “It is 3,000km with dust, fierce cross winds, bush fires and these long road trains of carriages which, as they pass, you can feel the buffeting effect of even in a Land Rover.

“We had beaten all expectations to get our vehicle Resolution to Australia in 2013. We had designed the car from scratch and built it in a year. It was completely different to anything that had gone before; it was smaller, lighter, with an efficient array of solar cells that could position themselves towards the sun.

But a big issue was, unlike the big teams participating, we were trying to study, fund-raise and build the car in our spare time.

Parts were delayed and the car wasn’t completely made when we began test driving. Also, our driving team was relatively ‘young’ in terms of experience: for example, one of our drivers signed up before she even had her driving licence.”

The team is confident the stability issues that plagued the previous iteration of the car have now been resolved and Amy Livingstone, head of the electrical team, said the new car is more powerful and its solar panels have been adjusted to allow it to absorb more solar rays.

“Working on a practical engineering project is an invaluable experience to students, many of whom, like Alan and Amy, are on theoretical courses,” she said.

“The challenge for CUER has always been maintaining momentum when each year many of our core team graduate and leave the university. We have a strong engineering team, experienced drivers and an exciting and innovative entry for the 2015 Bridgestone World Solar Challenge.”

The vehicle will be unveiled at the university’s sports ground later today and the coming months will be spent testing at the Jaguar Land Rover wind tunnel facilities and on the track at the Millbrook Proving Ground in Bedfordshire.

Posted by roxana on Jul 14 2015. Filed under _featured slider, Europe, Student, WORLD. You can follow any responses to this entry through the RSS 2.0. You can leave a response or trackback to this entry