Charge your phone in 2.5 hours with this paper thin solar charger

Solar technology is getting better and better, with a new Kickstarter campaign having been started for “Solar Paper”, which is touted as the world’s smallest solar chargers.

According to Tech Times, the chargers are available in four different models, with each offering different wattages, and the creators say that in the sun, the devices can charge an iPhone 6 in around 2.5 hours, which is a similar speed as a wall charger.

While the charger is very small, that’s not the only selling point for it. Other solar chargers require users to unplug devices and then plug them back in when the charger gets covered by a shadow. Solar Paper, however, simply stops charging due to not getting enough sunlight and will start charging again when it does get enough. 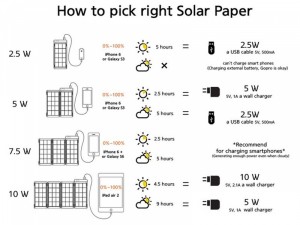 Types of Solar Paper by YOLK. Image via Tech Times

While the chargers are available in four models, different “models” include different numbers of panels, with each panel representing 2.5 W. Basically, the 5 W model is simply two panels, the 7.5 W model is three panels and the 10 W model is four panels.

This is also not the first crowdfunding campaign that Yolk has gone through. The company previously attempted to fund a solar charger called Solarade, which did not meet its funding goal. The company did, however, learn a lot through that campaign, such as one thing that users asked for after the last campaign being LED lights that indicate the charging status of the device. Yolk, however, took things a step further by offering an LCD display showing how much electrical current is being passed through the solar panel. This will give users a better understanding of solar technology and how it works.

“We would not put [an] LCD if we do not have [confidence] about our technology and the product,” says the company on its Kickstarter page. “We can display the power output because we are confident about our product and do not over advertise.”

For those interested in donating to the cause and getting their own Solar Paper charger, there are prizes between $49 for a 2.5 W model to $10,000 for a customized solar panel.

Posted by roxana on Jul 8 2015. Filed under _featured slider, INDUSTRY, Solar PhotoVoltaics. You can follow any responses to this entry through the RSS 2.0. You can leave a response or trackback to this entry