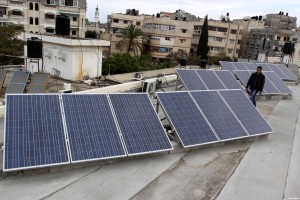 Solar panels on the roof of Gaza’s hospital. Photo via middleeastmonitor.com

A group of Canadian doctors hope to make blackouts a thing of the past for Gaza’s hospitals by installing solar panels to provide energy 24/7 for emergency rooms and operating theatres.

The “EmpowerGAZA” project has launched a fundraising drive on Indiegogo to secure the $200,000 required to fund the first hospital, with the ultimate goal being to supply a further three hospitals with the life-saving solar panels.

Power outages are a daily reality in the Gaza Strip, and can last more than 16 hours per day. Hospital patients are especially vulnerable, and insufficient power can be the difference between life and death.

According to Dr Tarek Loubani, an emergency physician and collaborator on the project: “Doctors in Gaza were asking for reliable and green power, and the United Nations Development Programme (UNDP) came on board immediately when they heard about the project.”

“Everyone agreed, this project is urgent. We believe people world over will understand the impact and help its success.”

According to Middle East Monitor, EmpowerGAZA is a joint initiative of the United Nations Development Programme (UNDP) and Islamic Relief Canada to provide a renewable, reliable source of energy for intensive care units (ICUs), operating rooms and emergency departments.

A crowd-funding campaign began on 28 April and will run through to 26 June.

Posted by roxana on Jun 25 2015. Filed under _featured slider, Asia, WORLD. You can follow any responses to this entry through the RSS 2.0. You can leave a response or trackback to this entry