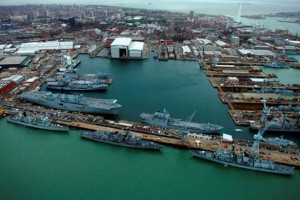 Portsmouth naval base. Photo via mirror.co.uk

The British navy’s base at Portsmouth, England is to benefit from on-site solar energy.

According to cospp.com, the base has had 2000 solar PV panels fitted and it is estimated the facility will save £1m over the next 20 years as a result of the installation.

The naval base’s head of infrastructure, Captain Iain Greenlees, said: “This is an important step on the path to modernising the base to support the Royal Navy on global operations.”

The MoD is expecting to save more than £500,000 this financial year thanks to the panels, combined with other energy-saving initiatives at the base, which have been project-managed by BAE Systems.

The 500kW panels are part of a contract called the Maritime Support Delivery Framework.

Posted by roxana on Jun 23 2015. Filed under _featured slider, INDUSTRY, Solar PhotoVoltaics. You can follow any responses to this entry through the RSS 2.0. You can leave a response or trackback to this entry