This free app can help you calculate your renewable energy potential 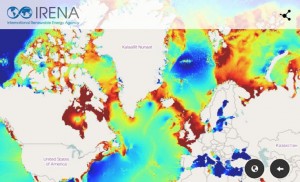 Businesses and individuals can make use of a free smartphone app to calculate the renewable energy generation potential of a given location.

According to Green Biz, the Global Atlas pocket was launched recently by the International Renewable Energy Agency (IRENA) and is designed to allow renewable energy “prospectors” and investors to comprehensively research projects before making early investment decisions.

The app draws on data from 1,000 maps provided by 67 governments and 50 data centers, and is designed to provide detailed information on whether a region or site represents a good prospect for renewable energy generation.

“One of the major hurdles to worldwide renewable energy deployment is reaching the needed levels of investment,” he said in a statement. “The Global Atlas pocket brings more investment certainty to renewable energy prospectors and investors. Users can freely access data from geothermal potentials in the Caribbean to solar potentials in the Middle East and anything in between. It is an incredibly powerful tool.”

The app is being targeted at energy firms, governments and community project developers and is available for iOS, Android, Windows Phone and Blackberry 10 smartphones.

Anita Marangoly George, senior director of the World Bank’s Energy and Extractives Global Practice, which supported development of the app, said it could prove particularly attractive to companies in developing countries.

The smartphone is an extension of IRENA’s online Global Atlas portal, which allows users to visualize information on renewable energy resources from any computer.

Posted by roxana on Jun 19 2015. Filed under _featured slider, BUSINESS, Market News. You can follow any responses to this entry through the RSS 2.0. You can leave a response or trackback to this entry