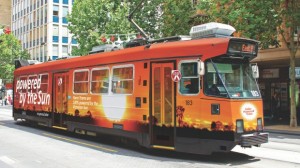 Digital impression of a Melbourne tram as part of a pitch before the state government to power the network with solar energy. Photo: Australian Solar Group

Melbourne’s entire tram network could be powered by solar if the state government gave a bold renewable energy proposal the green light.

While the pitch may conjure up images of trams with rooftop panels on them like the family home, the power would instead be generated at two new solar farms the project proponents plan to build near Swan Hill and Mildura.

According to smh.com.au, the company behind the bid, the Australian Solar Group, have held quiet talks over four years with different arms of the government to try get the project off the ground, but has so far not got final backing.

The two solar farms would generate 80 gigawatt-hours of electricity a year, about the same amount used by Melbourne’s tram network, which is the world’s largest.

Under the proposal the government would back the project by signing Public Transport Victoria (PTV) up to a power purchase agreement with the solar farms, creating a reliable revenue source alongside the renewable energy target.

The proponents say the project has been designed to ensure the cost of tram tickets would not rise, nor would it add to PTV’s power bill. It would cut 100,000 tonnes of greenhouse gas emissions a year from running trams and give the city an obvious global selling point, according to the pitch.

The Australia Solar Group was founded by businessmen Adrian Critchlow and Dave Holland. Mr Crtichlow previously helped start companies Booking.com and AlertMe, before successful sales of both. Mr Holland was formerly the head of Solar Systems, a company that was building a large solar project in Mildura before financial collapse in 2009.

Mr Holland said Australia Solar had tried to get almost all elements of the tram project ready to go before it sought final financial backing.

“This project is virtually ready to go. We can’t see any barriers that would stop it from here,” he said.

The tram project has been supported behind the scenes by members of the Melbourne City Council, including Lord Mayor Robert Doyle. Councillor Arron Wood said it ticked many boxes, from contributing significantly towards the city’s renewable energy target to creating employment and training opportunities in rural Victoria.

“Ultimately, whether this project proceeds rests firmly with the Victorian Government. I just hope they take the action necessary to get it done,” Cr Wood said.

A spokeswoman for the Andrews government said: “We are interested in how the project progresses and will continue discussions with the group.”

Australian Solar says the solar farms would span across 80 hectares and use 130,000 panels to track the sun throughout the day. It has planning and grid connection approvals for its Swan Hill site, with permit processes underway for the second site at Red Cliffs.

Posted by roxana on May 18 2015. Filed under _featured slider, INDUSTRY, Solar PhotoVoltaics. You can follow any responses to this entry through the RSS 2.0. You can leave a response or trackback to this entry