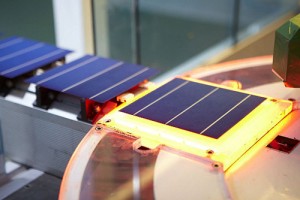 According to Energy Matters, Trina says its test Honey Plus multi-crystalline silicon module attained a new module efficiency record of 19.14% with an aperture area of 1.515 m2.

The results were confirmed by the National Center of Supervision and Inspection on Solar Photovoltaic Product Quality (CPVT) in Wuxi, China.

”This milestone achievement is the result of a very close collaboration among our silicon crystallization, solar cell and module scientists. We believe that innovation is playing the very essential role to Trina’s sustainable growth and long-term success. Our focus remains on developing innovative and cutting-edge solar power products and technologies to strengthen our leadership in the PV industry.”

In other recent news, the company announced the signing of an agreement with Toyo Engineering Corporation to supply approximately 116 MW of Trina Solar panels for use in Japan’s largest solar power project – a 231-megawatt facility to be built in Setouchi City, Okayama Prefecture.

Approximately 446,000 Trina Solar TSM-260PC05A modules will be used in the project, which will be situated on 1,210 acres of city land on the former Kinkai salt field.

The project is expected to commence commercial operations in the second quarter of 2019.

Trina Solar says Japan is a key market for the company and that solar will play a crucial role in the growing diversification of the country’s energy mix.

Trina Solar panels are also popular choice in Australia, where they are often used in residential solar power system installations.

Posted by roxana on Apr 27 2015. Filed under _featured slider, INDUSTRY, Solar PhotoVoltaics. You can follow any responses to this entry through the RSS 2.0. You can leave a response or trackback to this entry