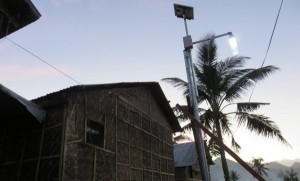 The streets of San Luis, Bogota, Colombia are now a little safer thanks to low cost solar-powered soda bottles.

Costing just USD $70 to construct, the street lights use a 3 watt LED lamp, controller and battery pack powered by a couple of small solar panels. The protective casing used for the lamp is just a plastic soda bottle – pretty much unbreakable under most conditions.

According to Energy Matters, 14 locations in Colombia have already been illuminated with these solar street lights and there are plans to install another 2,000 across the country in this year.

Quartz reports the super-cheap solar streetlights are a project of Liter Of Light; an organisation that rose to prominence with its promotion of Moser lamps. A Moser lamp is a plastic bottle filled with water inserted into a roof to refract sunlight into the room below; with a with a brightness equivalent to a 55w electric bulb.

Tens of thousands of households in the Philippines capital Manila alone have so far benefited from Liter Of Light’s Moser lamp inspired revolution, which has now also spread across the world.

2015 is International Year of Light and Light-based Technologies (IYL 2015). IYL 2015 isn’t just about increasing access to light, but the right sort of light. Lighting represents almost 20% of global electricity consumption (International Energy Agency). While this has a significant impact on the environment in relation to coal fired power generation, worse still is lighting fueled by kerosene.

“In developing and third-world countries without access to electricity, 1.3 billion people depend on kerosene for light. The burning of kerosene lamps leads to the death of 1.5 million people every year. Inhaling kerosene smoke is the equivalent of smoking 4 packs of cigarettes a day, and commonly induces respiratory illnesses such as asthma, bronchitis, pneumonia, and cancer in tens of millions of people,” states the IYL 2015 web site.

It’s also very expensive, with some families spend up to half of their income on kerosene.

An important aim of the International Year of Light will be to promote the use of portable solar-powered LED lanterns in regions where there is little or no reliable source of light. Solar lighting is literally changing lives – enabling extended productivity, enhanced security and without the negative health impacts.

Other low-cost solar powered LED lighting designed specifically for developing nations that we’ve covered in the past include LUCI, Luminaid, Solar Pebble, the Solar Schoolbag and the Australian-designed Mandarin Solar Light and Sunking.

Posted by roxana on Apr 17 2015. Filed under _featured slider, INDUSTRY, Solar PhotoVoltaics. You can follow any responses to this entry through the RSS 2.0. You can leave a response or trackback to this entry