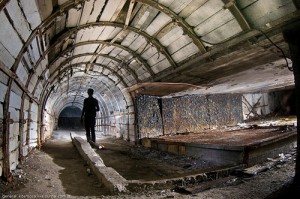 New technology could heat 45,000 homes in the UK, says team at Nottingham Trent University. In a novel example of the transition from high to low carbon infrastructure, researchers in Nottingham have discovered how abandoned coal mines could produce renewable heating for tens of thousands of homes and offices in the UK.

According to Business Green, as part of a two-year project, researchers at Nottingham Trent University worked with renewable energy firm Alkane Energy to explore how water at the former Markham Colliery in NortEast Derbyshire could be condensed in a heat pump and fed through a district heating network.

The team took naturally lukewarm water from the mineshaft and pumped it to the surface, where a heat exchanger extracted its thermal energy. The energy was then condensed through a heat pump to increase the temperature further while the water was returned to the mine where it becomes lukewarm again.

The team explored a series of old mines in the UK, which they estimate could provide enough heat for around 45,000 homes.

Professor Amin Al-Habaibeh of Nottingham Trent’s School of Architecture, Design and the Built Environment, who led the study, said he hoped the breakthrough would provide a new lease of life to abandoned mines.

“In a way we may never have previously envisaged, coalmines could once again be used to provide warmth to thousands of homes across the UK,” he said in a statement.

“But the key difference between yesteryear and tomorrow is that we now have the ability to harness their energy potential in a completely sustainable way.”

Alkane says it hopes to use the research findings to support a new business venture. The company already uses gas from disused mines to produce electricity, and it reckons harnessing heat from old mines could provide an additional source of clean energy.

Posted by roxana on Apr 14 2015. Filed under _featured slider, INDUSTRY, Solar Thermal. You can follow any responses to this entry through the RSS 2.0. You can leave a response or trackback to this entry