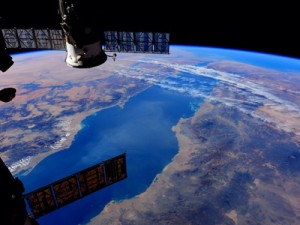 The Chinese solar space station is planned to be much more massive than the International Space Station. Photo: NASA via Instagram

China wants to put up a solar power station bigger than the International Space Station in orbit at 36,000 kms above the ground by 2050.

According to International Bussiness Times, the project would solve the energy crisis on Earth, the Chinese scientists behind the vision say.

An experimental space solar power station is planned to be in place by 2030, with a commercially viable one to be ready by 2050.

Wang Xiji, the 93-year-old academician of the Chinese Academy of Sciences and an International Academy of Astronautics member, who has devoted over 50 years to space technology research, is an advocate for the station.

“An economically viable space power station would be really huge, with the total area of the solar panels reaching 5 to 6 sq km,” he told official media.

Being in orbit the station would be able to harness solar energy 99% of the time.

Space-based solar panels can generate ten times as much electricity as ground-based panels per unit area, say the experts.

The electricity generated would be converted to microwaves or lasers and transmitted to a collector on Earth. The efficiency of the transmission will have to cross 50% before the project becomes economically viable.

The idea was first mooted back in the last century by science fiction writer Isaac Asimov in a short story titled “Reason”.

However, one of the chief hurdles in the realisation of the massive project is the need for a cheap heavy-lift launch vehicle, says Wang, who designed China’s first carrier rocket more than 40 years ago. “We also need to make very thin and light solar panels.”

Chinese space scientists believe the space station planned to be placed in orbit by 2020 will aid the solar project.

Besides avoiding the smog and pollution generated by its many fossil fuel power plants, the demand for energy is expected to be met by the space station. China is the world’s largest energy consumer as also the world’s top carbon emitter.

Posted by roxana on Mar 31 2015. Filed under _featured slider, Asia, WORLD. You can follow any responses to this entry through the RSS 2.0. You can leave a response or trackback to this entry