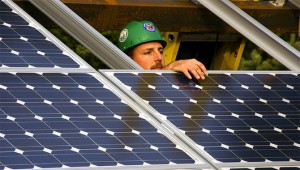 According to Bloomberg, an almost 50 percent drop in crude oil in the past year has pushed diesel prices lower, leading mines and other energy users to delay adding solar and wind projects.

“There’s no doubt about it there are a lot of parts of the world that see the drop in price as a reason for them to stall the decision on whether to proceed,” said John Eccles, director of global hybrid generation at First Solar Inc., the largest U.S. solar panel manufacturer.

Global renewable energy investment in mining was forecast last year by Ernst & Young to rise almost twentyfold to $3.9 billion by 2022. Now that target will take longer to reach, according to the consultants.
“While oil prices remain lower, it will slow down the adoption rate of alternative energy,” Mike Elliott, the Sydney-based global mining and metals leader at Ernst & Young, said by phone.

“There will be some of those investment decisions that will still default to a conventional fuel source as opposed to a renewable source,” he said.

As miners expanded into more remote locations during the decade-long commodities boom, they grew more dependent on diesel to generate power at sites that aren’t connected to the electricity grid. Energy accounts for as much as 40 percent of the operating costs at some mines, according to Ernst & Young.

There are fewer than 12 remote mining projects in the world that get at least half of their power from wind and solar, mostly ones in Chile that have been developed over the past couple of years, Elliott said.
When oil prices surged and renewable energy costs fell, it gave miners in countries from Chile to Australia a strong incentive to increase reliance on wind and solar to offset some of their diesel consumption.

The oil price drop may still benefit renewable energy. At least 27 nations are decreasing or ending the subsidies that hold down costs for fuels used to generate electricity, including coal and natural gas, the International Energy Agency said in November. That’s adding momentum to global efforts to limit greenhouse gases by increasing the use of clean energy.

Even with the drop in oil, total diesel fuel bills remain higher in some regions due to a range of factors from taxes to transportation costs, increasing solar’s appeal as an energy source, said First Solar’s Eccles.
The number of solar-diesel hybrid projects is forecast to increase, according to Tempe, Arizona-based First Solar, which signed a deal last year to bring solar power to a Rio Tinto Group bauxite mine in Queensland state.

About 40 to 50 power projects in remote locations across Australia, the world’s biggest exporter of iron ore, are seeking funding from the Australian Renewable Energy Agency, its chief executive officer, Ivor Frischknecht, said in a phone interview.

“Some projects have slowed down a little bit in terms of how aggressively they are pursuing it” as the price of diesel declines, he said.

Posted by roxana on Mar 26 2015. Filed under _featured slider, INDUSTRY, Solar PhotoVoltaics. You can follow any responses to this entry through the RSS 2.0. You can leave a response or trackback to this entry