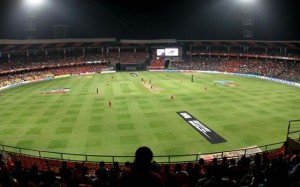 This year’s edition of the Indian Premier League in Bengaluru will be played on what the state cricket association claims is the world’s only solar-powered cricket ground.

According to The Economic Times, the Karnataka State Cricket Association (KSCA) has commissioned a 400-KW solar plant to power the entire M Chinnaswamy stadium, except for the high-intensity floodlights, before the IPL season commences next month. The company executing the project has proposed powering the floodlights too using solar energy as the next step in KSCA’s ‘go green’ mission.

“We are aiming to make this a green stadium,” said KSCA honorary secretary Brijesh Patel, a former India cricketer. “It makes economic sense for us to do this, and the additional power we generate will be offloaded to the grid.”

At present, KSCA consumes about 18 lakh units per year. After the solar power project is implemented, it is expected to use about 6 lakh units a year through solar and sell any additional power to the Bangalore Electricity Supply Co grid.

“In a matter of four years, the KSCA will get its returns,” said H Nandi, founder of city-based technology solutions firm MRO-TEK that’s implementing the project.”It would also be able to generate Rs 70-80 lakh revenue with the power it generates.”

MRO-TEK’s next target is the floodlights at the stadium. “Each floodlight consumes about 1 MW power, with each bulb carrying 1,000 watts of power. It can be replaced with 200 watt LED bulbs, which we plan to do experimentally without disturbing other floodlights. With this, power consumption would drastically reduce,” Nandi said.

Posted by roxana on Mar 24 2015. Filed under _featured slider, INDUSTRY, Solar PhotoVoltaics. You can follow any responses to this entry through the RSS 2.0. You can leave a response or trackback to this entry