Solar to become cheapest source of energy over next decade 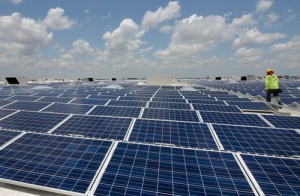 Solar energy to become the cheapest source of energy

Solar energy is set to become the cheapest source of electricity in many parts of the world within the next 10 years, according to a new report from German think tank Agora Energiewende.

Solar energy is set to become the cheapest source of electricity in many parts of the world within the next 10 years, according to a new report released by German think tank, Agora Energiewende.

The report was commissioned by the independently funded organisation, designed to steer Germany towards its 80 per cent renewable energy target.

According to Radio Australia, chief executive officer Dr Patrick Graichen said they wanted to see if recent falls in the cost of photovoltaics would continue.

“The finding is there’s no end to the cost decline in photovoltaics,” he said.

“The technology still has further improvements so we expect that within the next 10 years photovoltaics will become, in many regions of the world, the cheapest source of electricity.”

Dr Graichen said in some sun drenched parts of the world, it would be cheaper than burning fossil fuels.

The Current and Future Cost of Photovoltaics report found the price drop is set to occur even in conservative scenarios, and assuming no major technological breakthroughs.

Dr Graichen, former head of the Division for Energy and Climate Policy at the German Federal Environment Ministry, said the falling price was being driven by several factors.

“It’s the technology itself, the modules have become cheaper because China is now producing them on a very large scale,” he said.

“So we have the effect of the mature technology with a global market, where prices decline, and second, we’ve got to know better how to integrate it into the systems during the past five-six years.”

He said it was surprising Australia had not taken up the technology to the extent of countries like Germany.

“We have in Germany an extensive program on photovoltaics in the past years, and that has led to about 40 gigawatts being installed,” he said.

“That is still only 6 per cent of our electricity production, but still it is already 6 per cent, and we’ve seen how that already impacts on our electricity system in the sense that we don’t need peak power of gas-fired power plants in the summer anymore.”

He said given Australia’s sunny climate, solar energy should be thriving.

“If you look at that technology and you ask yourself the question, ‘where in the future will we have cheap and clean energy?’ It’ll be those countries in the world with a lot of sun and with stable investment conditions,” Dr Graichen said.

“You see a lot of solar projects are now coming up in the Gulf, in New Mexico, California, Texas, but Australia is lacking in that concept.”

The study highlighted while the cost of producing hardware for solar will continue to decline irrespective of local conditions, the financial and regulatory environments will be key to ongoing price falls.

It said stable regulatory conditions are needed to keep the cost of finance down.

“Those that were building railroads weren’t happy about cars either, but in the end the cars came because the technology was better suited to the needs of the 20th century.”

Posted by roxana on Feb 24 2015. Filed under _featured slider, INDUSTRY, Solar PhotoVoltaics. You can follow any responses to this entry through the RSS 2.0. You can leave a response or trackback to this entry