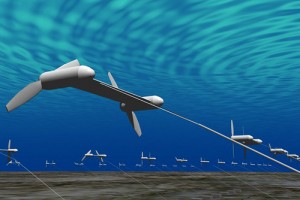 As an island nation, Japan controls large swaths of ocean territory, about the sixth-greatest expanse of any country in the world, according to government data. That is stark contrast to its relatively meagre land area, which ranks near the middle of list, in 60th place. So it makes sense for Japan to look to the seas for renewable energy — something it hasn’t done so far.

That is about to change, as the government is teaming up with two major industrial conglomerates, IHI Corp. and Toshiba Corp., to start field testing marine power generation in the near future.

“Our goal is to enable large-scale marine energy farms,” said a Toshiba spokeswoman, noting that the nearest site for testing is the area off Japan’s southern Pacific coast, where the Kuroshio current flows northward.

According to The Wall Street Journal, the initiative is an effort to develop new technologies to harness renewable energy and nurture future businesses opportunities as the need for renewable energy grows world-wide amid stricter regulations on coal in the U.S. and Western Europe. The Japanese government’s energy plan put forward in April 2014 called for an increase in use of renewable energy “to the greatest extent possible.”

IHI and Toshiba will spend about two years collecting data on currents at various locations to select the most promising ones. They will then conduct field tests by setting up a power generation system similar to an underwater kite anchored to the ocean floor that “flies” in the current.

The budget for the program is ¥2.75 billion ($23 million) for the current fiscal year through March. The government will subsidize part of the costs, but doesn’t disclose how much.

Marine current power generation technologies have already been developed and used in Europe, although they aren’t widespread. Japan wants to create its own technologies, say officials with the government-financed New Energy and Industrial Technology Development Organization, or NEDO, which works with the private sector on new energy technologies, and chose the two companies for financial support.

“Our marine environment is not the same as Europe’s,” said Yoshinari Takayanagi, an offshore wind and ocean energy project coordinator at NEDO. “There can be more suitable technologies.”

Posted by roxana on Feb 18 2015. Filed under _featured slider, Asia, WORLD. You can follow any responses to this entry through the RSS 2.0. You can leave a response or trackback to this entry