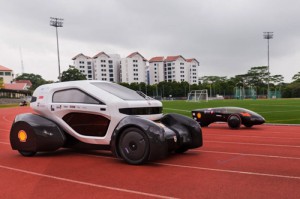 Two solar-powered electric cars, designed by students from the Nanyang Technological University (NTU), were unveiled by the institution on Monday morning.

According to Channel News Asia, one of the two is the first car in Singapore to be made with 3D-printed parts. Its cabin, which can seat one driver, is made of 150 3D-printed components that have been glued together using epoxy adhesive.

“We are extremely proud to have designed and assembled a 3D-printed body shell for the electric car,” Associate Professor Ng Heong Wah said. “The 3D printed car body was pushing existing technology to the limits and we are so pleased that it has paid off.”

“Using the latest engineering techniques learnt from their studies in NTU, the students have developed innovations such as silicon solar cells that can be contoured to follow the car’s shape,” he added.

Undergraduate Ilmi Bin Abdul Wahab, who led the development of 3D-printed NV8, said: “We decided to go with a 3D-printed cabin made from lightweight plastic, as we wanted to maximise the internal space and driver’s comfort while still being able to keeping the weight to a minimum. Despite being an Urban Concept car, it is no slouch and can reach a top speed of 60km/h, while maintaining low energy consumption.”

Co-designer Ng Jun Wen explained the unique honeycomb design for NV8: “For it to be lightweight, thin and yet strong, we integrated a honeycomb structure and a unique joint design to hold the parts together. When seen against the light, the structure has a translucent see-through effect, like a dragonfly wing.”

According to NTU, NV8 will participate in the Shell Eco-marathon Asia competition this year, under the Urban Concept category. Teams with more “roadworthy” fuel-efficient vehicles fall in this category, it said. The competition challenges students to design, build and drive a vehicle that can travel the furthest distance using the least amount of energy.

The students have also built the NTU Venture 9 (NV9), a three-wheeled racer, which can “take sharp corners with little loss in speed” due to its unique tilting ability inspired by motorcycle racing, the university said.

By developing the silicon solar cells innovation, Prof Ng said it allows for “maximum harvesting of the solar energy and a tilting mechanism” in NV9 that results in avoiding the loss of speed.

Explaining the inspiration behind their prototype, NV9 Team Manager, Winston Tan, said: “We took the tilting mechanism inspiration from motorcycle racing, where racers would lean left or right during sharp turns to maintain their handling and speed. For the car’s body, we aimed for it to be as streamlined as possible.”

The two NTU teams consist of 16 students from the various engineering schools. The cars were designed from scratch and students spent over a year to build them. Shell Eco-marathon Asia will take place in Manila from Feb 26 to Mar 1.

Posted by roxana on Feb 2 2015. Filed under _featured slider, Student, WEB. You can follow any responses to this entry through the RSS 2.0. You can leave a response or trackback to this entry