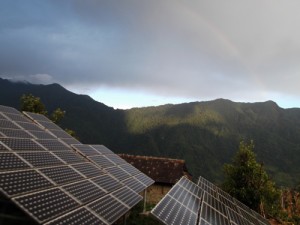 Sales of solar power systems have grown significantly in the past few years with load-shedding hours ever increasing. The government of Nepal has helped to boost the business further by providing subsidies to promote renewable energy in the country.

According to ekantipur.com, the surge in demand for renewable energy systems has led many companies to enter this niche market. Many companies have been launching various promotional campaigns and educating people on the benefits of installing solar panels for long-lasting energy supply.

More than 70 companies are competing for a share of the market in this segment in the Kathmandu valley, traders said.

“More and more residential houses and official buildings have been turning to alternative energy in recent years as load-shedding has been hampering people’s lives severely,” said Alok Kumar Gupta, head of marketing at Sipradi Energy. Sipradi, which entered this segment in 2010, has been witnessing a 40-50 percent growth in business annually, Gupta added. The company offers solar power systems with capacities starting at 80 watt and prices starting at Rs 45,000.

According to him, solar panels in the range of 120-150 watts and priced between Rs 45,000 and Rs 60,000 are in high demanded among households. “We recently installed a 40 KW solar panel at the Alternative Energy Promotion Office,” said Gupta.

“We are also focusing on expanding our sales and service network to make it easier for customers to avail of our products and services.” The company has 140 dealers across the country.

Meanwhile, an American solar energy equipment supplier Renogy has entered the Nepali market with a wide range of solar panels. “Today’s generation which has a busy schedule and uses technology a lot has been discouraged by the long power cuts. So we see a great market potential,” said Sudeep Chhetri, managing director of Suyash International, the authorised distributor of Renogy solar systems in Nepal.

“People have started realising that despite the higher initial cost compared to inverters, the solar panel system is more beneficial in the long run,” he said.

Corporate houses and banks and financial institutions, among other organizations, have been buying solar power systems instead of spending money on generators and inverters, he added.

Posted by roxana on Jan 30 2015. Filed under _featured slider, Asia, WORLD. You can follow any responses to this entry through the RSS 2.0. You can leave a response or trackback to this entry