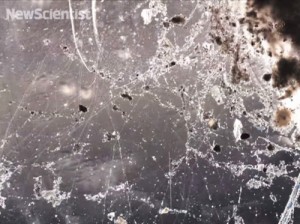 Microbiologists from California have discovered bacteria that survive by eating pure electrons rather than food, bringing an entirely new method of existence to awareness and raising questions about possibilities for alien life.

According to Extreme Tech, the ‘electric bacteria’ – as they have been dubbed by the team that discovered them – take energy from rocks and metal by feasting directly on their electrons. The hair-like filaments the bacteria produce carry electrons between the cells and their environment.

These bacteria yet again prove the almost miraculous tenacity of life — but, from a technology standpoint, they might also prove to be useful in enabling the creation of self-powered nanoscale devices that clean up pollution. Some of these bacteria also have the curious ability to form into ‘biocables,’ microbial nanowires that are centimeters long and conduct electricity as well as copper wires — a capability that might one day be tapped to build long, self-assembling subsurface networks for human use.

As you may recall from high school biology, almost every living organism consumes sugar to survive. When it gets right down to it, everything you eat is ultimately converted or digested into single molecules of glucose. Without going into the complexities of respiration and metabolism (ATP!), these sugars have excess electrons — and the oxygen you breathe in really wants those electrons. By ferrying electrons from sugar to oxygen, a flow of electrons — i.e. energy — is created, which is then used to carry out various vital tasks around your body (triggering electrons, beating your heart, etc.)

These special bacteria, however, don’t need no poxy sugars — instead, they cut out the middleman and feed directly on electrons. To discover these bacteria, and to cultivate them in the lab, the USC biologists quite simply scooped up some sediment from the ocean, took it back to the lab, stuck some electrodes into it, and then turned on the power. When higher voltages are pumped into the water, the bacteria “eats” electrons from the electrode; when a lower voltage is present, the bacteria “exhales” electrons onto the electrode, creating an electrical current (which could be used to power a device, if you were so inclined). The USC study very carefully controlled for other sources of nutrition — these bacteria were definitely eating electrons directly.

All told, various researchers around the world have now discovered upwards of 10 different kinds of bacteria that feed on electricity — and, interestingly, they’re all pretty different (they’re not from the same family), and none of them are like Shewanella or Geobacter, two well-known bacteria that have interesting electrical properties. Kenneth Nealson of USC, speaking to New Scientist about his team’s discovery, said: “This is huge. What it means is that there’s a whole part of the microbial world that we don’t know about.

As for the repercussions of finding bacteria that eat and excrete electrons, the most obvious use is in the growing fields of molecular motors and nanomachines. These bacteria, at their most basic, are machines that consume raw electricity — and so, with some clever (genetic?) engineering, it stands to reason that we might one day use them to power tiny machines that can perform tasks that are currently carried out by expensive, human-operated machines (cleaning up chemical spills, for example). These bacteria might also allow us to find out exactly how much energy a living cell needs to survive; put them in a test tube, and then slowly dial back the electrode voltage until they die. A cruel experiment, but one that would yield very informative results.

Posted by roxana on Jan 23 2015. Filed under _featured slider, USA, WORLD. You can follow any responses to this entry through the RSS 2.0. You can leave a response or trackback to this entry