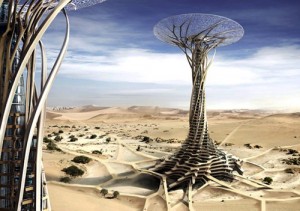 Sustainable, green construction in areas where people would never dream about living, is something that 3D printers could one day make possible.

According to 3dprint.com, a Chinese team designed the Sand Babel Towers, which are a unique concept group of buildings that can be constructed in the desert, with cranes, and 3D printers.

The actual design was submitted to eVolo’s 9th Annual Skyscraper Competition, and received an honorable mention. The competition challenged artists, architects, and designers worldwide, to imagine future towers that address a dense, energy and water-scarce world.

The technology to build such a set of structures is already available in its infant state. A man named Markus Kayser unveiled a solar powered 3d sand printer last year. This technology would need to be scaled up, of course, and undergo significant testing before it could be used for the construction of large skyscrapers, however that day may not be very far off.

The Sand Babel Towers are constructed in two main sections. The first section is the area above the ground in which people live, or work in. The design of this upper part of the structure mimics the natural phenomena called “tornadoes and mushroom rocks.” It is a duel funnel structure which helps with cross-ventilation, and allows for the condensation of water at the top because by taking advantage of the varying temperature differences.

The second section is a whole array of underground tunnels connecting each tower, as well as acting as a mechanism to slow down the flowing sand dunes. The tunnels also help facilitate communication between each building, and act as a root system for added structural integrity.

Although we are likely a decade or more away from seeing buildings like this actually constructed, the technology is progressing rapidly, and 3D printing will soon become a very important part of large scale construction projects. Discuss Sand Babel at 3D print Board.

Posted by roxana on Jan 20 2015. Filed under _featured slider, Asia, WORLD. You can follow any responses to this entry through the RSS 2.0. You can leave a response or trackback to this entry