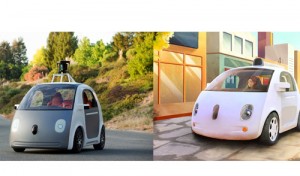 Google introduced its own, built-from-the-ground-up, electric self-driving cars earlier this year. This has got to be one of the biggest tech stories of the year. However, at that launch, the self-driving mockup vehicle, as Google noted in a Google+ post recently, “didn’t even have real headlights!” It has surely made a lot of progress since then, as the announcement was that the “first real build” of the cute little electric vehicle has arrived.

According to Clean Technica, briefly summarizing what has gone on since the first announcement on May, the Google+ post states: “Since then, we’ve been working on different prototypes-of-prototypes, each designed to test different systems of a self-driving car—for example, the typical ‘car’ parts like steering and braking, as well as the ‘self-driving’ parts like the computer and sensors. We’ve now put all those systems together in this fully functional vehicle—our first complete prototype for fully autonomous driving.”

Posted by roxana on Dec 23 2014. Filed under _featured slider, Gadgets, MARKETING. You can follow any responses to this entry through the RSS 2.0. You can leave a response or trackback to this entry