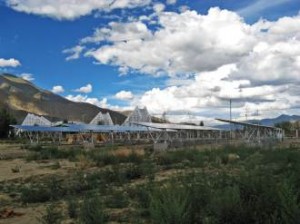 Lhasa, known as the “city of sunshine” has a special solar parking space

The area enjoys over 3,000 hours of sun every year. No wonder Lhasa is also known as the “city of sunshine” or “sun city”. As you can imagine, there you can find the finest setting for harvesting solar energy.

The project belongs to Beijing Corona, a company that chose the modular parking space Park@Sol, that can host a 1-row vehicle in this area. It is said that the solar power plant will start functioning this month. The exact location of the parking lot is in the north of Himalaya, Lhasa, also named capital of the Autonomous Territory of Tibet in the People´s Republic of China.

The spots altitude is 3,650 meters over the sea level, a number that gives Lhasa the title of the highest capital in the world. Still, because of this aspect, the people involved in the project, often had respiratory problems. Even considering this, the project for BEIJING CORONA SCIENCE & TECHNOLOGY CO., LTD will be finished as announced. The solar parking space can keep safe 54 vehicles and measures 103 kWp.

Another interesting fact about Lhasa is the fact that it hosts the Tibet Museum since 1996, one of the main attractions of the country. Here tourists can find artefacts from the beautiful history of Tibet, culture and Tibetan Buddhism. The museum will also enjoy the benefits of solar power, as the energy harvested by the carport will also provide for it.

At present, Lhasa can be proud of hosting the highest railroad, the highest brewery and the highest carport in the world. This couldn’t have been possible without Schletter.

Posted by roxana on Jul 22 2014. Filed under _featured slider, Asia, WORLD. You can follow any responses to this entry through the RSS 2.0. You can leave a response or trackback to this entry