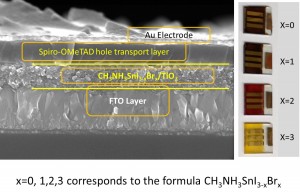 It has been a long time since human kind first started using the sun’s en energy for their activity. Not so long ago solar cells were invented. With their help people are able free energy in the everyday activities, for different devices from calculators to satellites.

Scientists are always trying to develop ways to improve these cell’s efficiency. With this in mind they created a special solar cell. This type of cell uses tin and not lead perovskite as the way to harvest the light. This was quickly seen as the next boom of the photovoltaic industry.

This type of cell is also eco-friendly and it was first developed by American scientists from the Northwestern University in Illinois. They were the ones to find out ways in which the new type of cell can be used with “bench” chemistry or the traditional method where scientists do the chemical mixing themselves. The type of chemistry mentioned is not always safe as some of the chemical reactions may be harmful to humans. As far as lead is concerned, it is considered to be a toxic element and it is poisonous not only if you swallow it but also if you inhale it. The first type of solar cells are made of lead perovskite.

The new types of solar cells are consisted of tin-based perovskite and they can be as efficient as the lead-based ones and they harvest light in the same way with the help of two electronic layers that make them safe to use. In addition to this, tin made solar cells are absorbing most of the visible light spectrum, and the salt in perovskite can be dissolved and come back to normal state with no heating needed, as the scientists report.

“This is a breakthrough in taking the lead out of a very promising type of solar cell, called a perovskite.Tin is a very viable material, and we have shown the material does work as an efficient solar cell. While tin and lead belong to the same group in the table of elements, the lead-free solar cell already recorded an efficiency of six percent, which the researchers considered as a very good starting point” are the words of lead author of the study Mercouri G. Kanatzidis, a Charles E. and Emma H. Morrison Professor of Chemistry in the Weinberg College of Arts and Sciences.

Posted by admin on May 7 2014. Filed under _featured slider, Energy Market, Market News, Solar PhotoVoltaics, USA. You can follow any responses to this entry through the RSS 2.0. You can leave a response or trackback to this entry