UK at the top of the list in European PV: largest market of the year 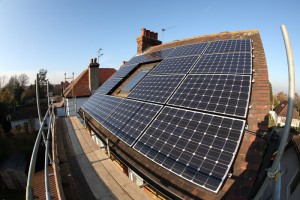 Who would have said that a country where is mostly rains would end up being so solar-friendly? Well apparently it is possible as U.K is rapidly moving towards the top on the list with the largest markets of the year. Developing more than 120 big scale PV farms, UK grew the attraction for project developers, as NPD Solarbuzz says.

UK at the top in EU PV market, as the ground-mounted solar PV farms develop

Over 100 large-scale solar PV farms in the British country have been approved and are said to be finished this year as NPD Solarbuzz UK Deal Tracker reports.

As far as the amount of new solar PV capacity is concerned, the analysts say that U.K is at 2.875 GW for 2014, meaning that approximately 1.72 GW will be added in this semester.

Even the last leader of the market, Germany, didn’t reach this figure as it has 2.6 GW.

The main purposes of the solar market leader will also concern rooftop and ground-mounted systems and solar PV farms are said to be the main provider in 2014.

Until the end of the month , over 325 PV farms in the 10 MW category will be completed. This means over 60 different sites will be installed. Moreover, 444 large-scale ground-mounted solar PV farms are being installer at the time, with the help of Renewable Obligation scheme. The last one are to be completed until the beginning of the next year.

“With the U.K. projected to be the largest solar PV market in Europe in 2014, global component suppliers and project developers need to quickly understand the dynamics of the U.K. solar PV industry,” added Colville. “Aligning with suitable partners and choosing the most attractive PV projects in the pipeline will ultimately determine the winners and losers over the next 12 months.”

Posted by admin on May 5 2014. Filed under _featured slider, Energy Market, Europe, Market News, Solar PhotoVoltaics. You can follow any responses to this entry through the RSS 2.0. You can leave a response or trackback to this entry