New power station will be installed at Dwarka by Delhi Metro 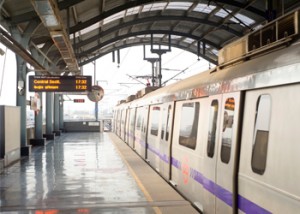 Delhi Metro, which became the country’s first public transportation system, is willing to install pv power plants on the roofs of its stations, in order to attempt preservation of the enviroment in New Delhi.

At Dwarka Sector 21 metro station will be the first 500 kwp solar power plant and it is predicted to become functional within six months.

This remains the largest roof top station with the aforementioned capacity in the Delhi-NCR region. This wiil be set after a PPA (Power Purchase Agreement) has been signed between Delhi Metro Rail Corporation and a multinational company engaged in the installation and management of solar power worldwide, in the presence of DMRC’s officials.

The central financing shall be provided by the developer and DMRC will afterwards pay for the units generated by the plant. This power will be offered to the DMRC at the presented station.

Anuj Daval, Executive Director at Corporate Communications mentioned: “After the installation of this roof top plant, Delhi Metro will also explore the possibility of installing more such plants at its stations, depots, parking lots as well as residential complexes.”
For the preservation of the surrounding environment, Delhi Metro has already got involved with a number of measures of providing sustainable means of energy.

DMRC was confirmed in 2011 by the United Nations to be the no. 1 Rail and Metro Rail based organization in the world to get Carbon Credits for downsizing Green House Gas Emissions, this aided in lowering pollution levels in the city by by 6.3 lakh tons yearly discharges and so reducing global warming.

Posted by admin on Feb 24 2014. Filed under _featured slider, Energy Market, Market News, Solar PhotoVoltaics, WORLD. You can follow any responses to this entry through the RSS 2.0. You can leave a response or trackback to this entry