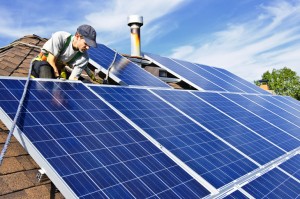 UK will have haalf a million installed solar panels

Half a million homes from the United Kingdom to own solar panels. This panels are to be installed on until the end of the year. Moreover, the clean energy industry says it could reach a million two years from now.

Half a million homes to be coved by solar panels in the British country until the end of the year as official figures show. In addition to this, the clean energy industry says the number will double by 2015.

Data given by the British government reveal that 495,459 solar panels were already installed. Most of them were planted on houses as a program of subsidies began three years ago. In this rhythm of more than 2,800 panels per week, the half million achievement could happen by the end of the year when about 2% of U.K homes will own a solar panel.

The Solar Trade Association announced that it wants to reach 1 million installations until the end of 2015.

Those who install solar panels under the ‘feed in tariff’ scheme will benefits from subsidies which are paid for through levies on all consumer energy bills.

Ministers’ initial effort to reduce the tariffs in in December 2011were controlled illegally by the High Court. Still the tariffs were eventually cut in March 2012 and the installation rate declined.

The cost of subsidies for small renewable installations like solar panels and wind turbines were £500m in the year to April 2013, against original forecast of £200m.

Untill 2015 they will reach £817m, meaning they will almost double the original £446m forecast.

Posted by admin on Dec 20 2013. Filed under Uncategorized. You can follow any responses to this entry through the RSS 2.0. You can leave a response or trackback to this entry