UAVs could bring solar into the air 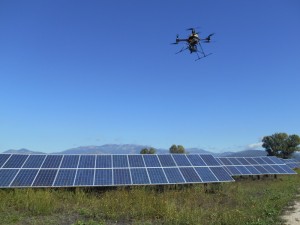 UAV will bring solr in the air

UK start-up New Wave Energy is working on the UAV technology for aerial renewables to be built. The company’s plan includes raising $500,000 through crowd funding.

The project designers of the new technology that have in mind installation of solar farms on the unmanned aerial vehicles believe the project could bring a lot of opportunities for solar companies worldwide.

The director of UK start-up New Wave Energy UK, Michael Burdett, announced that the firm’s technology can offer a new capacity for solar and wind developers and manufacturers by means of the construction of renewables projects above the world’s oceans.

New Wave’s patent pending UAV technology will ‘allow for large solar farms to be constructed with ease over the Atlantic, Indian and Pacific oceans,’ added Burdett.

New Wave wants the prototype to be useful in disaster relief efforts and to prove the technology’s viability.

The company is collaborating with Texas A&M University in the U.S. in order to work on the wireless transmission aspect of the technology, that has been developed transmit energy to Earth from satellites.

The director also announced that the company has spoken to solar companies to explore collaboration and the use of various generation technologies.

“We would prefer to use thin film technologies due to the weight limitations for a UAV but we are willing to consider silicon panels and CPV technologies as well,” added the New Wave director.

Burdett added New Wave’s technology could also be used to construct solar farms above the world’s desert regions and he would be happy to work with the Desertec project, which aims to generate solar energy from the world’s desert and transmit it long distances to global energy demand centres.

Posted by admin on Nov 25 2013. Filed under _featured slider, Energy Market, Europe, Market News, Solar PhotoVoltaics. You can follow any responses to this entry through the RSS 2.0. You can leave a response or trackback to this entry