The greenhouse in Fukushima tested by Solar Frontier 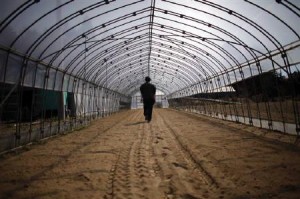 Fukushima, the place of 2011’s tsunami and the following nuclear accident, is a place that has been managed very carefully since the two years old disaster.

Still, emboldened by the Ministry of Trade and Industry’s (METI) “Projects Promoting Residential Solar and Economic Recovery 2012” program, the module manufacturer has started investigating the chances of solar energy to succeed in this area by partly supplying actual greenhouses with solar panels.

The “Greenhouse PV Demonstration Project” is a gathered project initiated by Solar Frontier and the Fukushima government to prove that the potential solar sale revenue of a selected greenhouse in Fukushima is real. Solar Frontier will install 324 solar panels with 50 kW total rated capacity across 1,300m² of greenhouse roofs and the greenhouse continues to grow its produce.

The point is to test how much impact will have the shading of the solar panels on the growth of the fruits and vegetables in the area. Results are to be published at the beginning of the next year, and could be a part of a new agricultural revenue stream for the PV industry.

German ground mount experts Belectric are also a part of the project, and are responsible with constructing and engineering the project, and inverters are supplied by SMA and greenhouse expertise coming from Les Industries Harnois.

The main purpose if Solar Frontier is the recovery of Fukushima and the company is giving away the solar power to local elementary and junior high schools in an effort to help fill the energy gap created when Japan decided to take its nuclear power plants offline.

Posted by admin on Nov 22 2013. Filed under _featured slider, Asia, Energy Market, Market News, Solar PhotoVoltaics. You can follow any responses to this entry through the RSS 2.0. You can leave a response or trackback to this entry