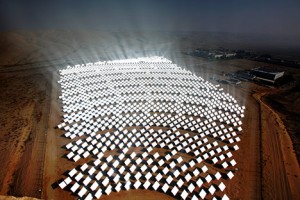 The $400 million cash and debt deal mean five California solar plants and one array built in Arizona that will have a combined capacity of 106 MW.

The private equity group KKR and Google have engaged in a deal to put money, $400 million to be precise, into a six solar plants installed in the U.S states of California and Arizona. The plants are to be constructed by Sharp Corp.-owned company Recurrent Energy LLC.

Google announced that the six plants, five in southern California and one in Arizona, are expected to function in the first trimester of the next year. Their capacity is sufficient to bring light for 17,000 homes.

Google reports that it would invest $80 million as part of the settlement. The total combined investment $400 million, is consisted of cash and debt.

The Internet giant said it would invest $80 million as part of the agreement. The Wall Street Journal reported on Thursday that the total joint investment, pegged at $400 million, was a combination of cash and debt.

This project is the internet giant’s 14th investment in clean energy and the second time it has partnered with KKR and Recurrent on solar projects. Google has invested more than $1 billion in wind and solar endeavors projects.

The San Francisco-based Recurrent, that will operate the plants n the future, has contracts for a long time with three buyers.

Google is a giant investor. Last month company reported that it will team up with Silver Ridge Power for $103 million investment in a solar plant.

Posted by admin on Nov 15 2013. Filed under _featured slider, Energy Market, Market News, Solar PhotoVoltaics, USA. You can follow any responses to this entry through the RSS 2.0. You can leave a response or trackback to this entry