The Japanese market is overflow by foreign-made cells and module 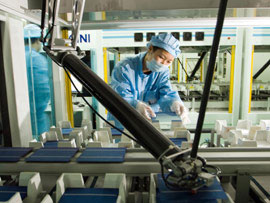 Domestic-made product levels in Japan are dominated by a huge amount of foreign-made imports in a time when Japanese solar cells and module manufacturers are willing to export globally.

Although Japan is considered to be a solid market for foreign solar developers to turn down, statistics from the country’s solar industry say that show cells and modules made outside Japan are enjoying a great success since onset of the world’s most generous FiT regime.

Since prime minister Shinzo Abe launched a JPY42/kWh (US$0.42/kWh) FiT payment in July 2012, the Japanese solar market has become one of the biggest global draws, a fact reflected in figures released by the Japan Photovoltaic Energy Association (JPEA) that show the amount of cells and modules shipped in Japan has trebled year on year.

After that, in the first part of the financial year total shipments went from 613.5 MW to 1.7 GW in the year’s first quarter, although FiT payment was being reduced to JPY37.8/kWh since April 1st.

On the other hand, shipment to Japan to Japan quadrupled from 445 MW to 1.65 GW the expense of cell and modules exports to the rest of the world that went down from 168 MW in April-to-July 2012 to 35.2 MW in this fiscal quarter.

As a matter of fact, -made cells and modules rose 313 MW to 521 MW is being shared as good news for Japanese solar manufacturers. Manufactured cells and modules outside Japan, that gathered 132 MW in the first quarter, went up to 1.13 GW this year.

Posted by admin on Sep 16 2013. Filed under _featured slider, Asia, Energy Market, Market News, Solar PhotoVoltaics. You can follow any responses to this entry through the RSS 2.0. You can leave a response or trackback to this entry