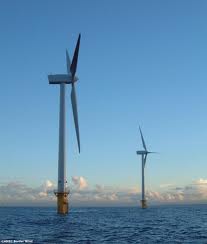 Nearly two years after a massive offshore earthquake and the tsunami which devastated the Fukushima Daiichi nuclear reactor and the mostly agricultural communities that surrounded it, the Japanese Agency for Natural Resources and Energy has unveiled plans to build the world’s largest offshore wind farm adjacent to the disaster zone.

The initiative comes part of a plan to reconstruct the area stricken by the disaster in March 2011.

By 2020, the government said, a total of 143 wind turbines on platforms 16 kilometres off the coast of Fukushima. The wind farm will generate 1 GW of power once completed, officials said.

Following the disaster at the Fukushima plant, all 54 of Japan’s reactors were shut down, and only two have been brought back online in the 21 months since as the government has tried to move closer to fulfilling its pledge to increase the use of renewable energy across the nation.

Among the unique features of the plan is Japan’s intention to rely on massive floating turbines which will be stabilised with ballast and anchored to the 200-metre-deep continental shelf that surrounds the Japanese coast via mooring lines, according to an analysis of the project by New Scientist.

The magazine also reported the wind farm will supply electricity to the powerful grid which Fukushima’s two nuclear power plants were connected to, reducing transmission costs.

The project is being overseen by Takeshi Ishihara of the University of Tokyo.

Posted by solar-magazine.com on Jan 29 2013. Filed under _featured slider, INDUSTRY, Technology, Wind. You can follow any responses to this entry through the RSS 2.0. You can leave a response or trackback to this entry