France starts the second offshore round 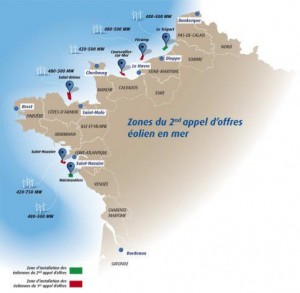 On 8 January, the French government declared the second bidding round for offshore wind farms off the French coast. This time a total of 1,000 MW are up for tender, divided into two farms.

These are the sites Le Tréport in the English Channel and the newly added area Noirmoutier south of the Saint-Nazaire project in the Atlantic, which were left empty-handed in the first bidding round. In both areas, there will be between 480 and 500 MW generated.

France expects investments of approximately 3.5 billion € through the projects for tender and to create 10,000 promising jobs through industrial development of this sector. The costs for the public will amount to 500 million € per year.

In the first round of bidding, approximately 2,000 MW were contracted at the beginning of 2012. That capacity is divided into four projects. The area Le Tréport was already tendered at the time. However, GDF Suez was the sole bidder – and was turned down by the French government due to the high price. To prevent this from happening in the second round, the price of the projects will gain more relevance. Overpriced offers will be excluded immediately.

In March, the second bidding round will open officially; applications must be submitted by September. The French government will award the contracts by January 2014.

Posted by solar-magazine.com on Jan 17 2013. Filed under _featured slider, INDUSTRY, Technology, Wind. You can follow any responses to this entry through the RSS 2.0. You can leave a response or trackback to this entry