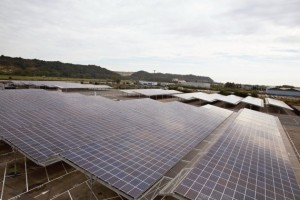 French automaker Renault has come up with a fabulously green way to shelter the cars that roll out of its assembly lines.

The company has recently installed a canopy soaked through with solar panels that has been termed as “the world’s largest photovoltaic system in the auto industry”.

The canopy generates green energy and also shelters the company’s cars beneath. Six of Renault’s production sites including Douai, Maubeuge, Flins, Batilly, Sandouville and Cléon will make use of these systems covering 40 hectares or 400,000 square meters in all.

Capable of generating 52,600 MWh of electricity a year and reducing Co2 emissions by 200-tons annually, these solar panels will prove to be a boon for Renault, helping the automaker substantially reduce its carbon footprint in France.

Posted by solar-magazine.com on Nov 16 2012. Filed under _featured slider, INDUSTRY, Solar PhotoVoltaics, Technology. You can follow any responses to this entry through the RSS 2.0. You can leave a response or trackback to this entry