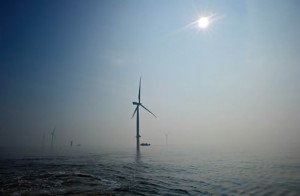 Located in the Thames Estuary, the project will be worth 630 MW when completed. Currently, just 15 of the total 175 turbines have been installed, with the rest being set up.

The remaining turbines are expected to be constructed by the end of this year.

Once completed entirely, the London Array will generate enough juice to power nearly 470,000 UK homes. And this is just the first phase.

The second phase of the project will increase the capacity to 870 MW, slightly off the previously planned 1 GW capacity.

Posted by solar-magazine.com on Nov 7 2012. Filed under _featured slider, INDUSTRY, Wind. You can follow any responses to this entry through the RSS 2.0. You can leave a response or trackback to this entry