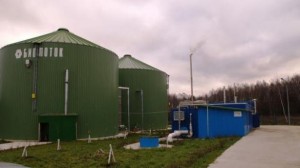 An industrial biogas plant was recently launched in the Belgorod Region in Central Russia.

The new station “Baytsury” is one of the first large scale industrial plants in Russia.

The station owned by the Regional Centre for Biotechnology, one of Russia’s largest companies, specializing in projects in the field of biogas energy.

The annual electric power output is estimated at 7.4 million kWh, while heat energy is 3,200 Gcal.

The Rostov Region and the Krasnodar Territory are among the most promising regions for the development of biogas technologies in Russia.

Posted by solar-magazine.com on Jun 18 2012. Filed under _featured slider, INDUSTRY. You can follow any responses to this entry through the RSS 2.0. You can leave a response or trackback to this entry