A new solar academy is opened in Kenya 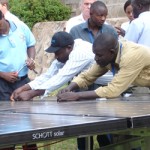 It is a partnership between Energiebau Solarstromsysteme Gmbh, Schott Solar, Solar Technology and the German Company for International Cooperation.

The German Solar Academy opened with a one-week training activity, which took place in mid June.

About 40 participants from Kenya, Tanzania and Rwanda were attended.

In addition to gaining knowledge on PV systems, including background information on the planning, installation, operation and maintenance of off-grid and grid-connected systems, the participants also visited the PV systems at the new UNEP headquarters.

Schott says that further training will be offered biannually.

Posted by solar-magazine.com on Aug 10 2011. Filed under _featured slider, Africa, Analysis & Features, BUSINESS, Education, INDUSTRY, Solar PhotoVoltaics, Student, WEB, WORLD. You can follow any responses to this entry through the RSS 2.0. You can leave a response or trackback to this entry