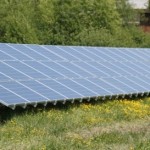 Six solar parks were putted on the grid by the german Vario green energy group in the Slovak Republic in May and June 2011.

The six solar photovoltaic power plants in Poltár, Biskupice and Ruminceparks have a power of 1 to 1.2 MW each and a total power of 6.2 MW.

The assembly time was six to eight weeks, but it worth because 70,000 solar modules will feed in an annual 7 million kilowatt hours of electricity into the local grid.

The plant operators will receive a remuneration of 38.23 Eurocents, according to the current Slovak feed-in tariff.

Since 1 July the solar electricity funding will be limited to roof-top plants with a power of 100 kilowatts maximum, but despite the cuts in financial support, Vario will remain active in Slovakia and plans to concentrate only on the roof-top market.

Posted by solar-magazine.com on Jul 15 2011. Filed under _featured slider, BUSINESS, Energy Market, Europe, INDUSTRY, Market News, MARKETING, Solar PhotoVoltaics, WORLD. You can follow any responses to this entry through the RSS 2.0. You can leave a response or trackback to this entry