The world most efficient EV 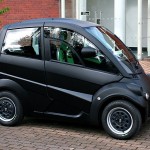 The T.27 city car, designed by Prof. Gordon Murray is claimed to be the world’s most efficient electric car.

He has been working on this project since a long time, and finally it has come out into the open.

Prof. Gordon Murray dreamed to make an electrically driven car ever since he unveiled McLaren F1 and he work on this project over the past three years.

The T.27 has a size that can easily fit into a single parking space.

It can accommodate three people inside, including the driver and has a massive upwards-swinging door.

The electric midget is a product of real innovation with a fully integrated electric motor, control system and battery design.

The vehicle isn’t a super car, because it has a top speed of 60mph; however the little vehicle leaves behind Mitsubishi’s i-Miev and the electric Smart Car with its efficiency.

It is 36% and 29% more efficient than i-Miev and Smart car respectively.

The vehicle can reach 100 miles on its charge and possesses a 33-horsepower electric motor charged by lithium-ion batteries.

The little T.27, it got tested under the strict Euro-NCAP safety standards and has been given” First Class” recognition.

Posted by solar-magazine.com on Jun 30 2011. Filed under _featured slider, BUSINESS, Energy Market, Europe, Exhibitions, INDUSTRY, MARKETING, Technology, WORLD. You can follow any responses to this entry through the RSS 2.0. You can leave a response or trackback to this entry