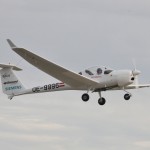 This is a partnership project among Siemens, aircraft manufacturer Diamond Aircraft Industries, and aerospace giant EADS.

The DA36 E-Star is consists of two-seater and uses a serial hybrid electric drive train in which a main engine is powered alternately by a gasoline-powered generator and batteries.

The aircraft has a 70-kilowatt Siemens engine and use additional EADS batteries during takeoff and ascent.

The plane’s range is limited by the number of batteries and the amount of fuel it can carry.

The public debut was at the 2011 Paris Air Show but its actual aerial debut was on June 8 in Vienna.

Posted by solar-magazine.com on Jun 26 2011. Filed under _featured slider, BUSINESS, Energy Market, Europe, Exhibitions, INDUSTRY, MARKETING, Technology, WORLD. You can follow any responses to this entry through the RSS 2.0. You can leave a response or trackback to this entry